This listing is being maintained by its rightful owner.

The time was nearing for the 1982 Franklin County Fair near Chambersburg, Pennsylvania, and the agriculture displays promised to be the most exciting ever.  However, the week prior to opening, one of the major state sponsored displays cancelled, leaving a large dedicated tent un-occupied.

One of the members on the Fair Board suggested an antique equipment display to fill the space and Aden Hawbaker’s name was suggested as a possible resource.  Aden was not only one of the most respected antique machinery collectors in our community, but also knew many of the other collectors because of his knowledge and expertise with early magnetos and ignition systems used on antique equipment.  The call went out and local antique equipment collectors were not only delighted, but eager for an excuse to show their “toys”.  The tent was filled…room had to be made for tractors of the past.  An old hand pump was motorized to pump water…peanuts roasted in a vintage roaster, “hit and miss” engines popped and banged…and the people loved it!  The fellowship among the displayers was wonderful, and stories were spun to anyone who would stop and listed to the old timers. 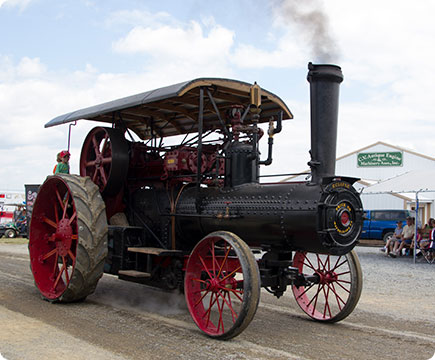 A roster was made of all the people displaying equipment.  Then the following January, (1983), a post card was sent to all on the roster inviting them to John Bricker’s Welding Shop to discuss the formation of a club or organization.  More than 50 interested people showed up for that meeting…and the rest is “history”.

In 1991 Mr. Wilbur Mackey, on e of the founding members agreed to sell the Association land for its’ permanent home.  In December of that year, the PA Department of Environmental Resources cleared the way for land transfer. Early in 1992, 29.5 acres of land West of the Mackey’s camp ground near Chambersburg PA was acquired.  The CVAEAMA paid the full purchase price for this land in cash.

Between the time of the purchase of the property and the Association’s annual show in August, plans were drawn and laid out for the Show Grounds.  Light poles were planted, and lights were hung.  Loading docks were built, a water well drilled, and running water installed.

The construction of the first building was delayed by The State Historical Commission.  The building permit was finally issued on Tuesday, three days before the opening of the ’92 annual show.  By Thursday afternoon, the 36’ x 90’ pole building was under roof, complete with running water and a temporary kitchen and dining room.  The building was called “the miracle building” by some, because of the speed with which it was erected.

By the time of the 1993 annual show, a permanent kitchen and dining area had been erected.  A roof over the Bar-B-Q Pit area and an additional 36’ x 90’ pole storage building was completed.  The original building which housed the temporary kitchen was then converted to a storage building.  Additional light poles and lights were added and a new driveway was cut.  The wooded area was cleaned up and passage ways opened for display areas in the shade.  In the 1990’s a new 56’ x 200’ building to house the steam displays and another building for the museum and library was constructed.

CVAEAMA is registered in Pennsylvania as a Non-profit Educational Organization, chartered to promote educational and charitable purposes, including, but not limited to bringing together men, women, and youths interested in antique engines and equipment, as well as to own and operate workshops, show grounds, and museum and library.

The organization manages one of the largest, most interesting, and well-attended antique machinery shows in the East each August.  The show is attended by thousands, many coming from as far away as Florida, Colorado, Iowa, Indiana, and Ohio.